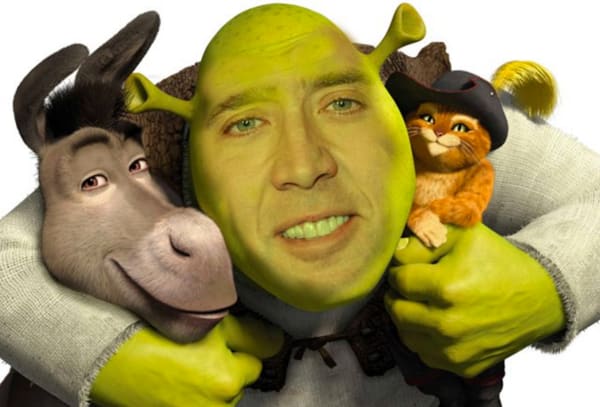 Donkey first makes his debut at a sale of mythical characters from beloved fairy-tales being sold to the evil Lord Farquaad's knights. An old woman attempts to sell Donkey, but magic pixie dust accidentally is unleashed upon him from a caged fairy, thus giving him the temporary ability to fly. However, the spell unleashed upon Donkey then breaks and he falls to the ground, being chased by Farquaad's knights into the woods, where he meets Shrek. Shrek is at first reluctant to meet the talkative and annoying Donkey, who begins following him around. Donkey requests to stay with Shrek since he has no one else. Shrek refuses, but finally gives in due to Donkey's constant begging, however, he only allows him to stay outside of his house and only for one night. When Shrek discovers all the fairy tale creatures are residing in his swamp, Donkey denies bringing them to the swamp, and the creatures reveal that Lord Farquaad evicted them there. Seeing how Donkey knows where Farquaad is and is the only one who is willing to help Shrek, he accompanies Shrek to Duloc, Farquaad's kingdom. When they arrive, however, Farquaad has his men try to kill Shrek in an arena to find the perfect champion to find and bring him back Princess Fiona, whom he wants to make his bride. Donkey and Shrek easily defeat Farquaad's men, and Farquaad decides to have Shrek be his champion instead. However, Shrek shows no interest, and only demands his swamp back. When Farquaad offers Shrek a deal to return him his swamp if he agrees to go on the quest, Shrek agrees, and Donkey follows Shrek on his quest to find Fiona. While coming to the castle, Donkey unintentionally catches the unwanted attention of the fire-breathing dragon. Shrek escapes, but Donkey is caught and cornered. Before the dragon attempts to doom him, he tries to avoid his fate by complimenting the dragon, whom he discovers is a female, and the dragon is greatly flattered by Donkey's compliments. She takes him to her lair to be intimate with him. However, Shrek rescues Donkey before things become too personal, and the two narrowly escape with the Princess. One night, during camp, Donkey asks Shrek why he hates everyone so much, and Shrek angrily reveals that everyone judges him a scary monster before getting to actually know him. Donkey acknowledges that he already knew that there was more to Shrek's character when they met. Donkey begins to notice a romance between Fiona and Shrek, despite their denials. The next night, Donkey goes inside a windmill to talk to the Princess, only to discover that she becomes an ogre herself after sunset. Shrek overhears them talking, and misinterprets the conversation as Fiona insulting him. The next day, Shrek berates her for what she said and Lord Farquaad comes to take her. Donkey tries to clear things up with Shrek, but Shrek berates Donkey as well, and even insults him. Hurt and angered, Donkey claims his half of the swamp for his hard work helping him. The two get into a heated fallout, whereupon Donkey finally explains that Fiona did not say that Shrek was ugly. Hearing this, the two make up and become friends. Donkey then has the dragon, whom he reconnected with earlier, take him and Shrek to Fiona's wedding to clear things up with each other. After Shrek saves Fiona from marrying Lord Farquaad and Dragon swallows Farquaad, Donkey sings "I'm a Believer" at Shrek and Fiona's wedding reception and takes his love, Dragon, as his wife. On Shrek in the Swamp Karaoke Dance Party!, he sings "Baby Got Back" by Sir Mixalot